Kendra Chubbuck and her 16-year-old llama, Maxwell, in the cab of the F/V Barbara Anne. By Nat Barrows

Llama on a lobster boat: a move to Isle au Haut

Kendra Chubbuck had a problem.  She wanted to move to Isle au Haut to live with her fiancée, John DeWitt. She sold her home, quit her job in Wiscasset (CEI, inc) and was ready to go. The only problem?  Maxwell.

Maxwell is her 16-year-old llama. Chubbuck has owned Maxwell since he was 8 months old.

“When I planned on moving to Isle au Haut, I thought about trying to find a home for Maxwell,” Chubbuck said. “But my vet and mentor told me that if he were separated from me, Maxwell would likely die within a few months, because he has been with me for so long.”

How do you move a llama to an island? Easy—by lobster boat! Kendra Chubbuck leads her llama, Maxwell, onto fiancé John DeWitt’s boat on January 2 as part of her move to Isle au Haut. By Nat Barrows

One reason Chubbuck didn’t want to bring Maxwell to Isle au Haut is the llama’s susceptibility to the meningeal worm, a parasite carried by deer on Isle au Haut. However, the vet has inoculated Maxwell with a double-dose of a vaccine to help ward off the parasite.

The second reason Chubbuck was wary of bringing Maxwell was practical—how do you transport a llama to an island?  The answer, it turns out, is on her fiancée’s lobster boat on a calm day in January.

On Saturday, January 21, Maxwell and his close friends (two geese, a baby duck and a dog), several people and the rest of Chubbuck’s belongings packed into DeWitt’s lobster boat, F/V Barbara Anne.

“Everybody did great,” Chubbuck said. “Maxwell did awesome.”

Llamas can live into their mid-20s, and make wonderful pets, according to Chubbuck. “They’re curious, good guard animals and hard to make mad,” she said. She was nervous about the trip because llamas can be sensitive to stress, but the llama seems to be settling in well, she said. 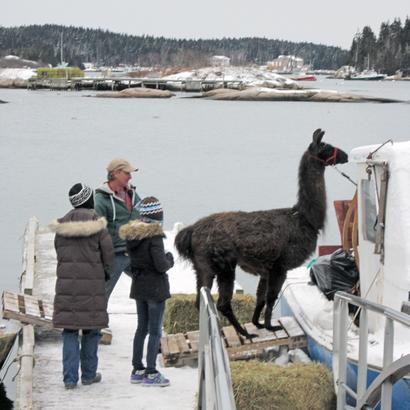 Maxwell the llama stands stubbornly on the ramp to the lobster boat that carried him and his owner Kendra Chubbuck to their new home on Isle au Haut. By Nat Barrows

“I think he likes it here,” said Chubbuck, whose family, including her great-great-grandmother, is from Isle au Haut.

Chubbuck plans to open a gift shop with DeWitt just off the public landing. The Shore Shop, as it will be called, will open Mother’s Day weekend and specialize in Maine-made goods.

Chubbuck may bring Maxwell down to play near the shop.  “He loves people,” she said of the llama, who has marched in parades, visited nursing homes and a school and once even appeared at a Barnes & Noble open house.

“He’s very friendly and walks better than my dog on a leash,” she said of her pet.

For now, Chubbuck says, she is going to plan her small wedding and the opening of the shop and let Maxwell adjust to his new home. 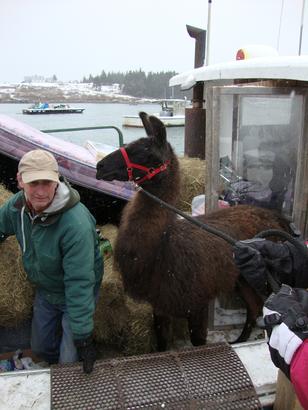 John Dewitt helps to get Maxwell the llama off the lobster boat upon arrival to its new home on Isla au Haut. Photo courtesy Eddie Reed 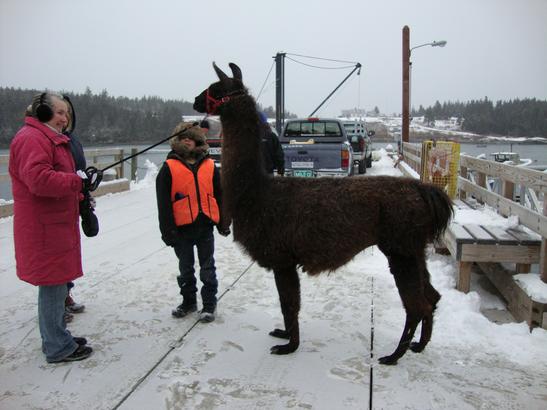 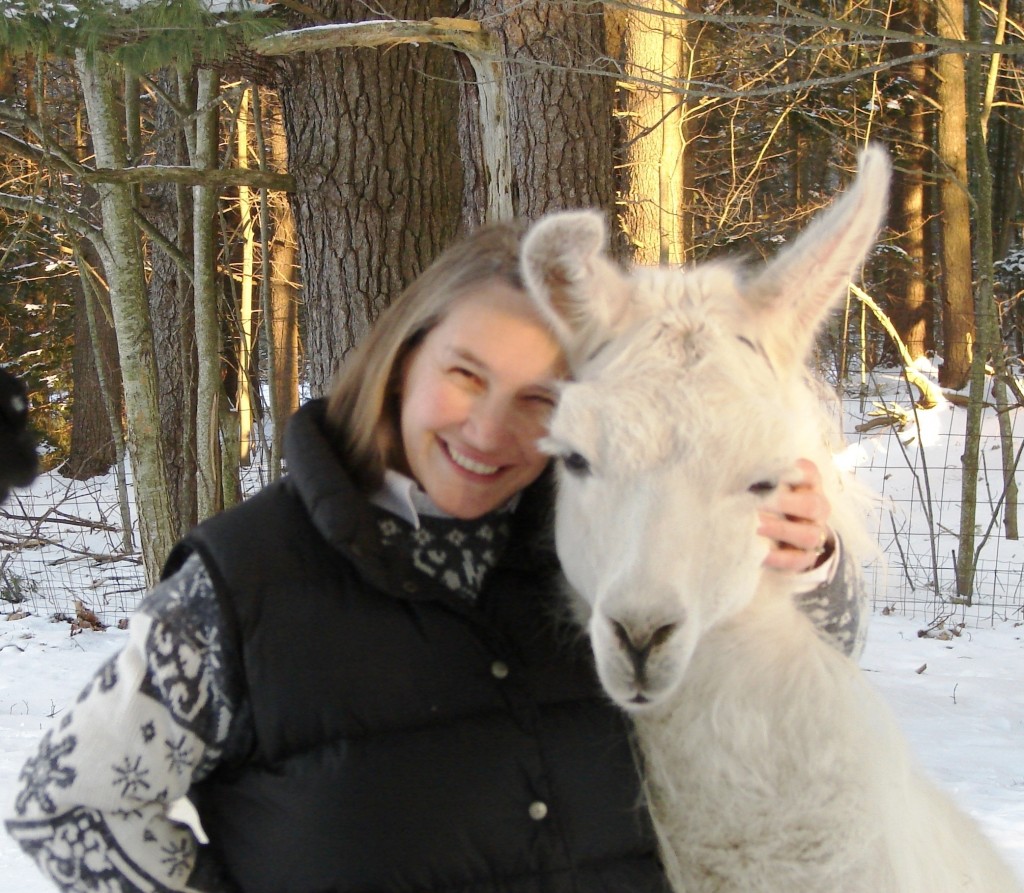